The Chair seat, criticised by Xenophon.

Xenophon and the Greeks
Greatly influenced by Persian horsemanship, the Athenian Xenophon is our starting point. Although perhaps not the first or the second oldest known historical writer, he is the first for which we have a large body of work. Written in around 350 BC, the two treatises "On Horsemanship" and "The Cavalry Commander" were considered the earliest extant works on horsemanship until the publication of a Hittite by Kikkuli of the Mitanni Kingdom, which dates from about 1360 BC. A treatise on horsemanship by Pliny the Elder is believed lost, as was that by Simon of Athens, which is twice mentioned by Xenophon in "On Horsemanship". However some fragments of Simon's treatise survive.

Xenophon describes how the rider should mount, taking the rein loosely in his left hand either gripping the mane near the ears or using his spear while with his right hand hold bridle and mane at the point of the shoulder. He would draw himself up with his left hand, while also using his right to lift himself, throwing his right leg across the horse without resting his knees on the back of the horse. Much influenced by Persian horsemanship Xenophon follows Persian fashion in suggesting that the groom should know how to give his master a leg-up in the Persian fashion, if the master was old or infirm.

Rather than sitting on the horse's rump as if in chair with bent legs, the rider sat forward with the lower leg and foot hanging lax and easy from the knee downwards. The body above the hips was kept as loose as possible to help the rider withstand tiredness and be less likely to be pulled or pushed off in combat. The lower legs and foot could be protected by a boot made of sandal leather. This helps the rider feel every movement of the horse's back muscles and sense what the horse is doing and about to do.

Xenophon suggests that horses' hoofs could be hardened by getting them to stamp on a bed of hard round stones. "No foot, no horse" as the old maxim goes. A thick quilted saddlecloth could help protect a horse's back and prevent sores. A pad could also make horses with a protruding bony spine more comfortable for their riders. Xenophon recommends a horse with a "double back", a recessed backbone with enough muscle either side to support the riders pelvic bone. Squadrons may have adopted a saddle cloth of uniform colour, and officers liked leopard skin. Both are useful for keeping horse sweat from the rider. A broad comfortable back would have made for a comfortable ride and a good weapons platform. Xenophon states that reins should match the leather of the bridle and not be weak, slippery or too thick. Cavalrymen would march on foot as much as possible to save their mounts, and the health of their horses would be their prime concern. 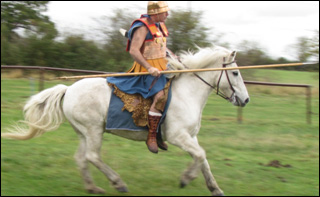 Xenophon makes no mentions of riding schools but does advise regular exercise over all types of terrain and on the use of training javelins against opponents with buttons on the points. In Greek and Hellenistic cities there would have been public cavalry displays, tournaments and equestrian displays. He clearly believes in working with the horse in a balanced and collected manner, without jerking the horse in the mouth or kicking him in the belly. Iconography shows horses that were collected, seemingly ready to respond instantly to aids or signals from the rider. But Xenophon does not emphasise the use of the legs and his understanding of collection seems different to ours. There are shades of methods of natural horse training in his work, allowing the rider and horse to become willing partners in a relationship of trust and understanding.

To a modern English rider, riding as a Greek may seem like a big step. No stirrups, no saddles, controlling the horse with the left hand while holding weapons with the right may be perceived as too difficult. Riding western cowboy style with the reins in the left hand controlling the horse by neck reining is a good starting point. You do not want to look like a sack of potatoes and I try to keep in mind the posture of the riders on the Parthenon frieze. Sit on the imaginary back pockets of your imaginary jeans and keep the horse well collected. The Greeks used the snaffle bit, and Xenophon recommends a hinged snaffle as opposed to a solid bar. A variety of different types of snaffle have survived, some of them of great complexity. An educated horse and rider can do great things using a simple snaffle, but many Greek horses seem to be star gazing.

We rent our horses from a horse supplier, and they are very well schooled and trained. But most horses have their own bit and it would be a little rash for me to start changing a horses' bit before a public display, but more acceptable for a specific film shoot. A variety of snaffles can be used and bridles can be great fun to make. Weapon handling involves relatively long javelins, and Xenophon states the rider should advance from the left, draw back his right side and rise up gripping with his thighs to throw the javelin. Today we need to concentrate on riding the horse first of all, focussing beyond the target ensuring the horse does not stop at the target. We aim at the base of the target and let the speed of the horse carry the weapon on to the desired point.

We cannot be sure every Greek horseman followed the precepts of Xenophon, or were as dedicated. But Greek cavalry do seem to have an enviable record of success especially when operating in the north of the country. It is often said they played little role until after the Persian Wars, yet they are there if you look hard enough. Before the Persian Wars Hippias the tyrant of Athens used Thessalian cavalry to ride down a force of Spartans between Phaleron and Athens on especially cleared terrain. And at Marathon and Plataea Persian cavalry was especially feared by the Greeks. At Plataea the Persian cavalry had great success in forming the battle, but it was the Theban cavalry fighting for the Persians who routed a force of Megarian and Phliasian holpites leaving 600 of them dead. When well organised and properly led, cavalry could play an important part on the Greek battlefield. Which, leads us to the next stopping point, the Scythians and people of the steppe.