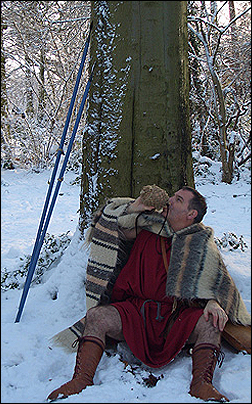 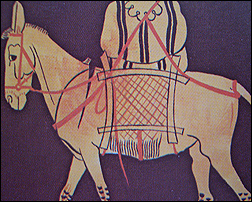 Donkey with wooden framed pack, Athens, 475 BC. now in the Museum of Fine Arts, Boston.

Straps And Packing
Xenophon said an army could never have too many straps and he wasn't wrong! Made of leather, fabric or plant fibre then would have held just about everything together, including pontoon bridges. It is convenient to tie several to kit bags and baskets within easy reach. Throwing straps, ankulai, could also be used to give javelins greater distance. Straps or wicker could be used to make muzzles to lead horses without hampering their breathing. Horses would be unbridled unless ridden. Straps were also needed to hold footwear together and footwear was a constant cause of concern. Karbatinai could be made from rawhide, simple rough moccasins that encased the entire foot. Replacement footwear would be organised at the suskenia level. Blisters and abrasions would be common problems, while rawhide brogues would trap moisture around the foot and constricted circulation. Damp and wet shoes if dried out too quickly would crack and harden.

Repetitive marching would cause ligament and muscle damage and even stress fractures. Such injuries would need time to heal, and affect both young and old soldiers. Walking sticks or bakteriai are mentioned by Xenophon, and hobbling soldiers could support themselves on spear hafts. Doctors, iatroi, were uncommon although veterans might have some practical knowledge. They could extract weapons, cauterize, clean and bind wounds, but above all, give comfort. But against infection they would be powerless. Soldiers would try and keep up with their colleges for as long as possible, before their mess mates had to carry him. Slaves and animals could help with the task but they may have had to abandon their wounded in some circumstances.

Baggage carts could have carried bulky heavy items such as spare equipment and casualties, but soldiers carried their battle gear on them. Donkeys, mules, horses and oxen would have supported panniers, pulled wagons and carts. A close bond would develop between the men and their animals. Horses could be expensive while donkeys were relatively cheap, perhaps predominating over mules by a ratio of four to one. Wooden framed pack saddles could have been used, but a simple twin pannier technique was perhaps more common. Overloaded animals were a common sight, but loads were relatively light by modern standards, in the region of 80-90 kg or 176-200 lb. But this would still represent a major advantage for the mess group. Twin panniers, kanthelia, were fastened with an underbelly strap and care was taken not to irritate the flanks of the animal. Pack animals were even known as kanthelioi.

Two wheel carts were easier to pull than large heavy four wheel versions. Oxen would be needed to pull larger carts and were distributed as booty. Carts and wagons could perhaps accommodate around 300 kg or 660 lb. Xenophon describes orders for packing up, loading baggage and preparing to march. Troops must have fallen into a morning routine of packing and reading equipment and animals for the march. It is useful to double tie items on to yourself, baggage animals and carts. Knots can come undone and need constant attention and care.