The Greek and Hellenistic Period 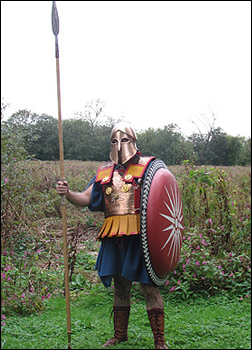 The new tube and yoke cuirass.

A new Tube and Yoke Cuirass

Without the funds for a good bronze thorax back in 2008 I made a simple vegetable tanned leather tube and yoke armour. It was relatively quick to make and allowed me to experiment with leather dyes, paint and inks. The tube wrapped around my lower stomach twice, giving extra protection to an area unprotected by bone. I hardened the leather of the tube and was impressed by the protection offered. I normally have a good store of leather aside, but back then I was short of suitable leather and made the yoke from thinner leather, which I did not harden.

Overall I was pleased with the result. I had to shorten the pteruges, and always intended to make a new yoke. But as is the nature of such things, an item made partly as an experiment is still going strong three years later. It has been worn at least once a week during this time and is still holding up well. The yellow red colour scheme was partly based on Sekunda's view of the Macedonian army, and partly on the stele of Aristion from around 500 B.C. But in truth I had no specific dateline in mind when I made it.

But this summer one of my many jobs was to make a new tube and yoke. I wanted to use bronze scales, and luckily with the help of a friend I was able to source some red bronze scales. Therefore I wanted to make something that could be dated to the late 6th century B.C. and great Persian wars, but also would not disgrace a Thracian, Scythian or even Sarmatian of the 5/4th century B.C.

Over the past few years various writers have demonstrated how the shape of the tube and yoke developed over time. I was happy to make something short in the body, with short stiff pteruges, which would allow me to move and sit comfortably. Over the past few years, members of Roman Army Talk and various re-enactment groups had made armours of many different designs and qualities, and it had been interesting to learn from their experiences. I used my old design as a basis but have to say I learnt far more making my second armour than I did from making my first. I have a learnt a great deal in three years! I wanted the armour to be a viable defence against spears and arrows. Too many leather armours made by re-enactors look as if they could be defeated by a small fruit knife - made to look right but not fit for purpose. While I appreciate that a tube and yoke cuirass is not meant to be proof against such weapons, and the defensive qualities of the shield should be taken into account, I still wanted this to offer a high level of protection.

Many of us were brought up with the great Peter Connolly's idea of laminated glued linen armour in a Greek context, the famous linothorax. We have now moved on to leather armours, but there is little agreement to the type of armour used. Some like mineral tanned leather, in this period alum-tanned or tawed. Without oiling this easily rots in water and is better for in-door use. Some like the idea of rawhide which can set very hard and be moulded. But once again it is susceptible to wet, is inflexible, and needs oiling and waxing. I firmly support the use of vegetable tanned leather which can be hardened, moulded and is perhaps the most common form of leather.

Most iconography shows such armours finished in a white. This would be produced by using alum during the vegetable tanning process, but I was unable to source any such leather. Vegetable tanned leather is generally a pale tan colour and it is possible to dye it yellow. By wetting, dying and drying the leather rapidly it is possible to harden it and as with my first tube this was the approach I took. The top layer of pteruges was cut integral with the body and the second layer was sewn on, the stitches protected by an applied "belt" over them.

I did not want the scales sewn directly to the leather, since piercing the leather could weaken it. Instead nearly 2000 scales were wired to each other and stitched to linen, with another sheet of linen applied over the first to cover the stitching and wire. The scales were attached tightly to the linen, far more tightly than on my Roman armours, meaning they were less susceptible to upward strikes. But the design retained its innate flexibility. The linen and scales were then stitched to the top and sides of the yoke. The tube was edged in goatskin inked in red. Indeed red ink was used to decorate the whole armour. The resulting tube was heavy, but very, very strong.

The yoke almost seemed a separate project. I cut two leather sheets and soaked them together in milk, pressing them together. The natural gelatines in the vegetable tanned leather helped "glue" the leather together laminating it. The result was an interesting aroma, and a yoke of around 1 cm thickness. More scales were applied and the whole thing edged in goat skin to protect the laminated leather from damp. The result was very heavy and a very viable armour. I attached the yoke to the tube with five copper rivets, but these are under a great deal of stress due to the weight of the two components. I used some simple gold plated Medusa fittings designed for furniture. They may well be changed in the future but they were in the "useful" box and needed using for something. Waxed linen ties hold the armour closed and provided all the thread for sewing. 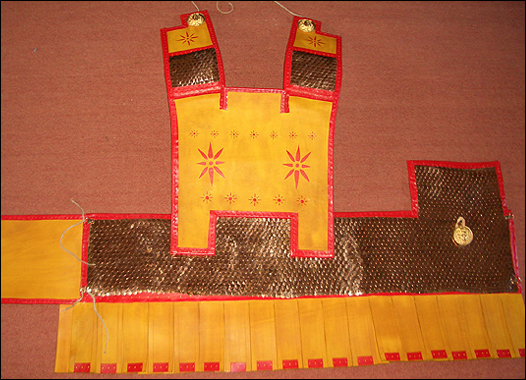 I need to use the armour for a few weeks before I can really comment on what is like to wear. The neck guard on the back of the yoke seems to work well with most of my helmets, although the horizontal neck guard on my Illyrian helmet may cause issues in time. Shaping the armour for a perfect fit is a challenge and I can now see how my first tube and yoke could be improved. This armour will be worn on horseback and it allows me to move and sit on a horse. The pteruges while very stiff will ease with time and bell outwards. The yoke protects the target area inside my collar bone very well, and certain areas of the body are protected by around 4 cm of hardened leather and bronze. Indeed the armour does seem like the "battleship" of the tube and yoke world with nearly 2,200 scales. It is heavy armour compared to my first version, weighing 18 lb or 7 kg, but more than acceptable compared to armour from other periods.