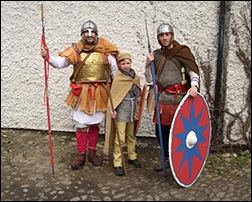 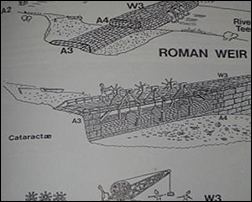 Piercebridge is today a small village grouped around the village green. Most of it lies within the ramparts of the old fort, on the Roman road of Dere Street. The old Roman bridge crossed the river Tees just west of the present version. One of the purposes of the walk was to examine the remains of the bridge and riverfront and try and gain some understanding of the site. So early one Saturday morning, Catherine, myself, Thomas, Harry and David parked to the south of the river. Paul and Bradley joined us.

This is a confusing site. The English Heritage display boards tell a story of the original bridge been washed away, and rebuilt downstream, where stonework taken to be bridge abutments are clearly visible. Well thats one possible version of the truth.

Raymond Selkirk proposed a different scenario, and one with possibly great implications. He carried out much work on the site in the 1980s. He proposed the bridge stayed in one spot, as borne out by the finds. The visible stonework is in fact a Roman weir, designed to dam the Tees, to allow navigation and re-supply up river. The weir was backed up by a series of leats, the whole sophisticated system giving greater prominence to river traffic. To back up his theory he demonstrated that the visible stonework was too small to be bridge abutments, and the wooden beams that would have been carried by them are to small to be load-bearing beams for a bridge. Case proved in my opinion.

We strolled around the fort, taking in ditches and the holes in the ground, which once held lilies. The latter are now just holes, but once held wooden posts with metal spikes on top as a simple form of land mine. The site was memorable for the amount of dog dirt.

After that came the walking. Paul, Bradley and myself marched as heavy infantrymen, David as a very new recruit walked in Gore-Tex. We headed south from the bridge past the remains of a Roman signal station with excellent views to the south and the east. After a short while along the ditches of Dere Street we struck west. Talking about the Sung dynasty, Pacific south-west China, and the kind English climate we braved fields of horses, and passed several dead sheep. After about three miles Paul was heard to say this was an easy walk. We were privileged to stop for lunch in an abandoned derelict medieval chapel. It was amazingly atmospheric, and even had its own dovecote. We came down off the ridge to cross the river to the north bank at Gainford. Paul was heard to say if he couldnt do the marches he would feel really old at the age of 38. From Gainford we had a scenic walk along the riverbank back to Piercebridge. We increased the pace for this bit.

The six miles turned out to be eight, which we did in five hours. The armour and marching kit really takes it out of you. Paul didnt have a shield strap, and his calcei soon got wet. The result was blisters on his feet and his hands. A double whammy. He was heard to say he was too old for marching! I think David wondered what we were doing, marching around the countryside past dead animals. I wore just one pair of socks, so got sore areas, which were on their way to being fully blown blisters. The armour made my body feel pleasantly tired, especially after some malt whisky. Bradley just did it - easy!

For me the walk was all about understanding the role played by river traffic in supplying in-land forts. Riparian walking has much to recommend it. But the signaltower was an evocative spot as well. We need to do more signal towers in September. Watch this space.